“He’s done it!” exclaims senior captain Alex Bunnell as a ball is hit right to the far corner of the court. This is a phrase that everyone has been hearing for the past 3 years on the Mt. Blue tennis team, and one that makes everyone look up from their game and smile. Out on the courts during the spring sports season, people always seem to be having a good time, and they enjoy the practices even when the weather is extremely cold, or hot and muggy. “We try and make sure we are practicing every day,” said Zac Conologue, who has been coaching the team for three years. When he started coaching there were nine players on the team; now in his third year there are 18 players—double the amount of when he started. Although the team has grown, it has kept its sense of good team chemistry which allows practices to be enjoyable and productive. 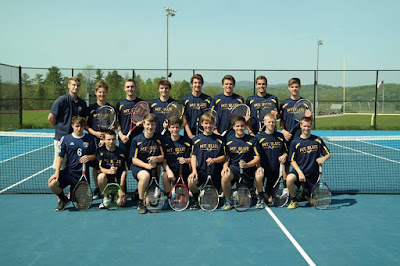 The growth of the team has rounded the team out well: it now has about four students from each grade on the team, just one more reason why the team is so deep and competitive. An important part of the team is bonding. This includes team dinners and other activities, which allow the team to mix and the players to get to know each other. Although Mt. Blue doesn’t practice year round because of the lack of facilities, most members of the team participate in soccer which not only means that they are better team players, but also athletic on the field and the courts. Each year when the spring sports season starts, there is no doubt that the tennis team is out practicing—even if there is still some snow on the courts.

Working hard from the start of the season makes Mt. Blue tennis noticed by the other teams. The Mount Ararat coach says that he is always impressed with the talent and level of play that the Mt. Blue players consistently have despite the lack of year-round facilities. This season, three of the boys on the team made it to the round of 48 which is the 48 best singles players in the state. All three made it to the round of 32, with Evan Backus—a senior and captain—making it to the round of 16. Mt. Blue Tennis has made a name for itself going further into the playoff season each year in the past three years, while last year also being given the sportsmanship award. This achievement is a reminder to everyone that the Mt. Blue tennis team is out there to have fun.
Posted by MBC at 11:50 AM