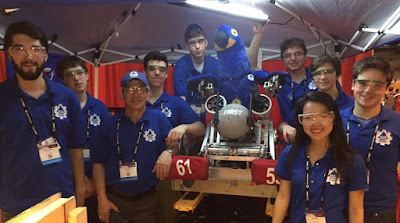 It has been a quite a breakout year for Blue Crew Robotics, but the team is still looking toward the future. As a team of First Robotics Competition, or FRC, the Blue Crew did very well at all four events they competed in, the last of which being the World Championships.

The team came into existence at the beginning of the 2015-2016 school year, brought forth by a Mount Blue student’s own vision. Mitch, a senior, who had been a member of the local FIRST Lego League team, was introduced to FRC through other Maine teams such as SMART of Spruce Mountain and Infinite Loop of Messalonskee. During his senior year, Mitch decided that Mount Blue could use a robotics team of their own. “I met some kids from 2648 [of Messalonskee] over the summer, and they led me to a lot of resources that made starting a team easier,” said Mitch. However upon initially bringing the idea to Computer Technology teacher Richard Wilde, some concerns were raised about how the program would be funded. “I liked the idea,” Wilde remarked, “I just didn’t think we could afford it.” From there, Mitch drew up a comprehensive plan to fund the team and returned with it. Finally, Blue Crew Robotics became a reality, with Richard Wilde as the lead mentor, and Mitch as a captain.

Soon after, other members joined, such as Thomas, the now-junior-captain of the team. Thomas had also participated in Lego League, and was quick to join. “I’m glad that Mitch started the team,” Thomas stated. The team spent an intense six weeks cutting metal and soldering wires until their bot had to be “bagged and tagged”, signifying that no additional changes could be made until the competitions.

Originally, the team had planned to only go to two events their rookie year, but those plans changed. After unexpectedly taking home a District Winner and a “Rookie All-Star” banner from the first, and earning a high placing in the second along with a Judge’s Award, the decision was made to compete in another event, the New England Championships in Hartford, Connecticut. There the team had another excellent showing, placing as the highest seeded rookie and once again winning the Rookie All-Star, this time out of the entire New England District. With that, the team qualified for the FIRST World Championship in St. Louis, Missouri. After some lengthy discussion, it was decided that going to Worlds as a Rookie team was an opportunity that shouldn’t be passed up on, and the decision was made to attend one more event. By hitching a ride with Messalonskee, the Blue Crew made it to St. Louis and had a successful performance.

After that wild ride, the team has had a chance to catch their breath and begin to plan for upcoming year. “I would really like to see it continue to grow and improve. We accomplished a great deal this year, but we still left some stuff on the table,” commented Wilde. “I would like to expand into an even better team. But it’s ultimately up to the students. If they come together as a strong team, then we’ll have a strong team.” Being a beginner team this past year, the Blue Crew still has some room for improvement. “While we did have some dedicated members this year, some other teams are much bigger, sometimes having upwards of thirty or forty members. We’re going to be looking to get more numbers for next year.”

During the offseason, the team is going to be hard at work fundraising, growing the team and training the members. To any prospective members that are interested by the idea of joining a robotics team, but afraid they might not have enough technical skill, Mitch offered some advice: “Students shouldn't worry about not having any technical skills or knowledge. Many of the kids I've talked to have said they don't know anything about robots. That's okay! Neither did any of us when we started. If you're a creative thinker and problem solver, there's a place for you on the Blue Crew, in building, brand marketing, programming, or even driving the robot.”
Posted by MBC at 12:34 PM