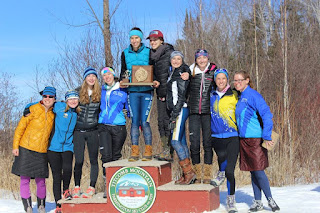 The Mount Blue High School nordic ski team has always had a “pretty dominant profile,” according to assistant coach Patty Veayo, who has been involved with the team since around 2009-10. In the recent past the team has won the Class A State title for years on end, and in the 2015-16 season the boys and girls both walked away with the trophy. Also in the 2015-16 season, the girls nordic team won the Sportsmanship Award. Grace Andrews, a captain of the 2015-16 team, says, “Girls and boys both won the Class A State Championships but personally I'm most proud of the girls winning the sportsmanship banner.”

How has the team grown to be so strong? 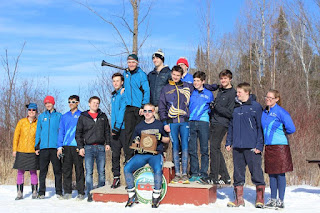 One of the key things that defines the Mt. Blue High School nordic team is the community and resources available to skiers. “This team has a great community and a pretty impressive history,” says Tucker Barber, top skier for the 2015-16 team, “From Bill Koch, to middle school skiing, and into high school, nordic (and alpine) skiing at the mighty Titcomb mountain are huge staples of the Farmington area.” Starting from the age of five, kids from the Farmington area have the opportunity to nordic ski. Skiing is “part of the town's identity,” says Grace Andrews. Year round access to over 16 kilometers of nordic trail, 2.3 km of which is lighted for nighttime activity, all at the very centralized Titcomb Mountain, makes it easy to produce fast skiers. “If you look at our feeder program it’s huge,” says Coach Veayo. All of these great opportunities add to the reason why Mt. Blue has been so successful. “What I think is just swell is that we have a bunch of great skiers who have been doing the ski thing for a while, as well as a bunch of also great skiers who just kind of show up and learn on the spot,” says Barber. The team has a tremendous mix of new and old skiers, and the spirit of the team is what counts.

The atmosphere amongst a team is vital to the success of the skiers. Head coach Claire Polfus says, “We try to be positive, and emphasize enjoying and having fun as well as skiing fast. Those are my goals.” This positivity really shines through as it is something not all teams have. The team is for people who “want to learn how to have a passion for something for an entire lifetime,” says Coach Veayo, “You can nordic ski until you die.”

The goal is to produce life long athletes, and the positive attitude is what helps students develop the love for the sport. As Welly Ramsey, a 2009 Mt. Blue High School graduate and ski team alumnus, thinks back on his time with MBHS nordic ski team he says, “The team atmosphere was always really positive, which I think is important, especially from a developmental perspective. We were fortunate to have such a great crew, all striving to preserve Mt. Blue skiing’s legacy of success.” Ramsey continued on from the MBHS nordic team to train professionally, and is now aiming to qualify for the 2018 Winter Olympics in Pyeongchang for nordic skiing. The atmosphere of the Mt. Blue team, competitive and uplifting, as well as support from the Farmington community, added to his desire to pursue nordic skiing.

To coach Claire and Patty, the team is really about the skiers and everything they’re learning. “I really like it when [the skiers] come up to me after a race and have to tell me something that they’re really excited about like, ‘that was the best classic race of my life, like I finally felt good!’” says Coach Claire. “The smile that you see on a skier's face when they know, they just know, that they’ve had the ski of their life,” is what Coach Patty loves, “and that happens every single race someone has that moment.” 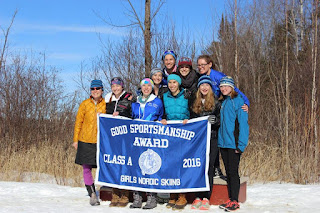 That is what this team is all about: learning more about the athlete, both individually and as a team. Although everyone races individually, the entire team is important to the success of each person. “Working together for one common goal is very satisfying,” says Nolan Rogers, another top scorer on the 2015-16 team. The team is a family. “Everyone is looking out for everybody else,” says Coach Patty, “[the athletes] work really hard” and “push and support each other,” adds Coach Claire. 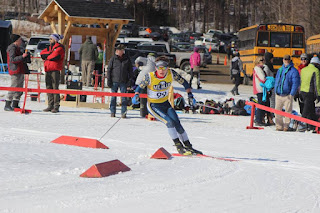 The numerous plaques, medals, banners, and trophies show that this team is fast, but the team’s attitude represents Mt. Blue, and the surrounding community, as a whole. “I think the ski team represents how our community can really come together and work as a team to accomplish something,” says Andrews. As a captain this year Andrews says, “The team has inspired me to be an example for younger kids.”
For decades this team has set a strong example by producing caring, active, and determined community members. Patty Veayo concludes, “If you want to have an activity where you can be yourself at any time in the winter” then nordic skiing is for you.

(photos courtesy of Heather Huish)
Posted by MBC at 11:54 AM