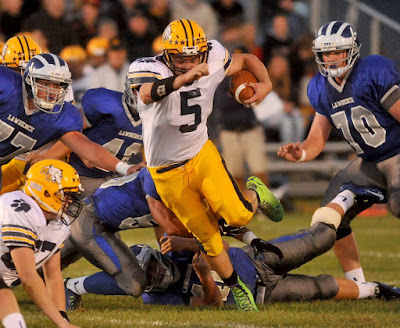 For years, the gridiron of Mount Blue High School has been a gathering place for the people of Farmington, Maine. “The field is simply the grass roots analogy where when the community comes together and nurtures its growth and develops into sheer beauty!” says Mount Blue Alumn, Kawika Thompson. Kawika was a graduate from Mount Blue in the year 1987, and still has a passion for what the football program was able to do for not only him, but the community around him. In a recent interview, Kawika stated that the football games on Friday nights serve as a “pillar” for bringing numerous communities together, and there was nothing like hearing the roar from the crowd at kickoff, and feeling the support not only from students, but the support from the entire community.

The sports of Farmington, Maine are the town’s culture, and football is its backbone. The accomplishments of the program give the community a sense of pride, and when the team wins, the whole community wins. It’s almost like the lights of Caldwell field attract town members like moths, and they feed on the competitive environment. As the game approaches the start, the bleachers fill, the cowbells come out, and the mothers of the athletes are already screaming. Kawika states, “The lights on the field, the cool Maine air and the clicking of the cleats across the parking lot set the tone for any Friday night game.”

People seem to notice a decline in attendance at games, but no one has seen a decline in the intensity of the fans and players. After the State Championship win in 2012, the community has been expecting another perfect season just like that one, but have been disappointed. No season from there has been perfect, but the program is definitely on the rise, and the community is starting to take notice. Kawika states that the “love for the game” will overcome any boundaries that the team is faced with. With a playoff run in the 2015 season, a new coaching staff, and a promising group of seniors, the town of Farmington is hopeful to see what comes next for Mount Blue Football.